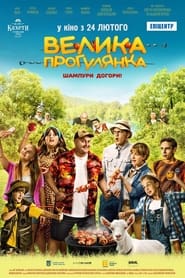 The comedy plot unfolds around two totally different families: the Drahomanov working in culture and the Nalyvaychenko who are local businessmen. On a spring weekend they decide to go for a traditional open-air barbecue and by virtue of destiny arrive at the same clearing each family considers theirs. A quarrel starts between them, quickly transforming into a grotesque war for a barbecue spot. Unexpectedly, a third claimant for the territory arrives; this is a bribe taker on the run who hid his money in this same clearing and takes the youngest children from both family's hostage, demanding to give back the money that disappeared from the hideout. Tricks, frame ups and oppositions, adventures, unexpected guests and crazy money, different views not only on barbecue marinade recipes but also on the right ways to live. This is a story telling us that no matter how different we are and how much we quarrel, we are always a united, powerful force in the face of a common threat.